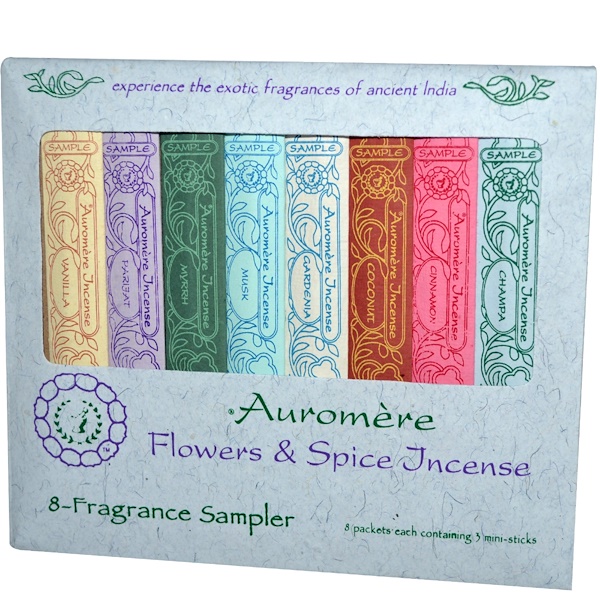 Auromre "Flowers & Spice" Incense is imported from Pondicherry, South India, where incense making is an ancient art and cottage handicraft. This unique selection represents an exotic mix of well-known aromas from the ancient land of spices. Auromre incense is made with the highest quality essential oils and is available in 8 "Flowers & Spice" fragrances:

Champa - The heavenly fragrance of Plumeria rubra as known as Frangipani, the pagoda tree or the temple tree is well-known throughout India. The flowers come in clusters with softy velvety petals in a large variety of color combinations. The spiritual significance of the Champa flower is Psychological Perfection.

Cinnamon Cinnamon is one of the oldest known spices in the world. Its sweet, pungent fragrance comes from the bark or leaf of the Cinnamomum zeylanicum tree; its aroma stimulates and refreshes the mind, steadies the nerves and invigorates the senses.

Coconut The rich, soothing aroma of Indian Coconut is both exotic and comforting. Its mellow fragrance lingers long after the stick has finished burning.

Gardenia The heady, Jasmine-like fragrance of the Gardenia flower has long been sought after and treasured for its intoxicating perfume. It grows outdoors in warmer climates as an attractive shrub with brilliant flowers whose spiritual significance is Perfect Radiating Purity.

Musk The exotic aroma of Musk, is a musty sweet and exhilarating fragrance that comes from the essential oil and powder of Indian Kasturi / Manjal fruit. It has been highly sought after as a perfume since ancient times and its effect on the atmosphere is both energizing and uplifting.

Myrrh Prized in all ancient civilizations, Myrrh has been used variously as a perfume, incense and medicine. Its ethereal fragrance awakens an awareness of the spiritual reality behind everyday existence.

Parijata When in bloom, the flowers of Nyctanthes arbor-tristis or Night jasmine can be found carpeting the ground beneath the tree with abundant small white and orange blossoms. They are often gathered and strung into fragrant garlands for the hair or offered in the local temples. The spiritual significance of the Parijata flower is Aspiration.

Vanilla The sweet, creamy scent of vanilla is a popular favorite and is especially helpful during stressful times. It is known to help dissolve pent-up emotions, improve self-confidence and evoke a soothing sense of well-being.